I am the Frankenstein Monster NFT & Book Release Minting now 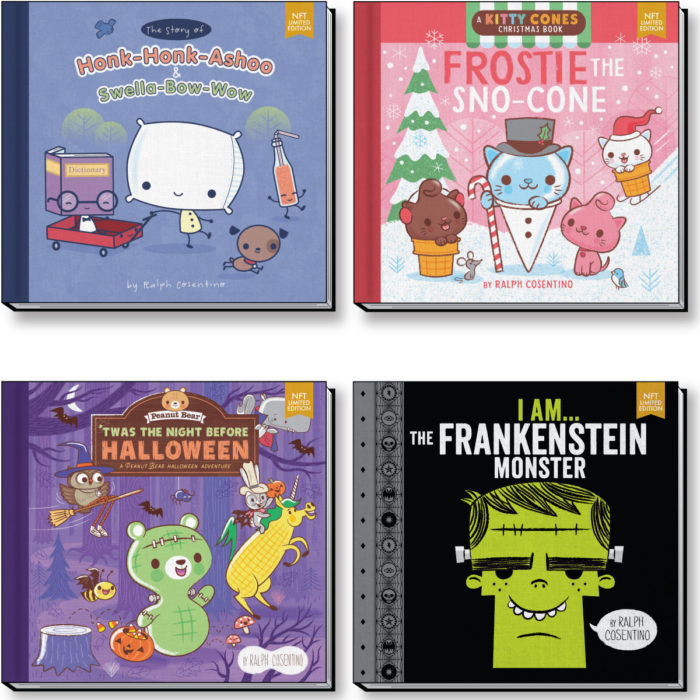 Once our goal is reached of selling out the 10K NFT collection, we print 10K physical editions for every NFT/holder PLUS 5k ADDITIONAL books for our charities! 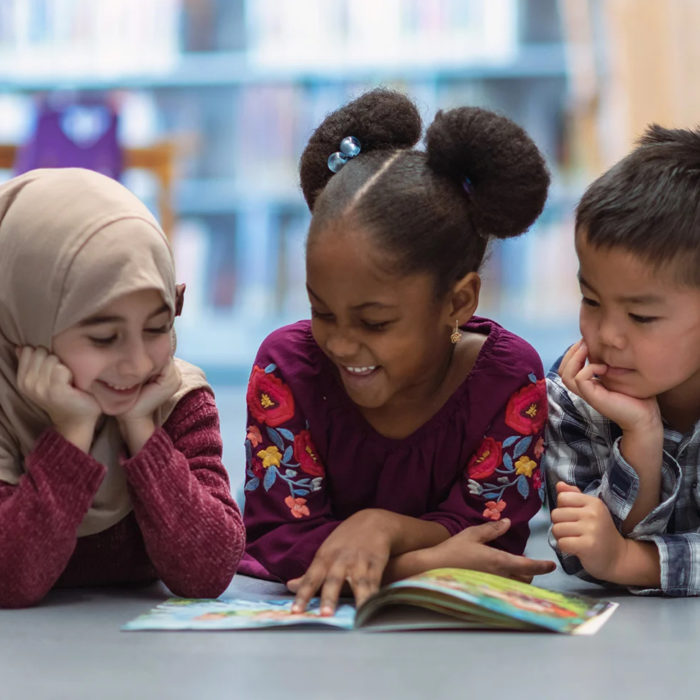 Holders choose to ship each book per NFT to
themselves and/or to our literacy partners.

Hello world! My name is Ralph Cosentino, I'm the Founder of Cruikshank & Wallace and the creator of Kitty Cones!  I've been a children's book author & illustrator most of my career. I started C&W because I have a passion for NFTs & children's books including how they're designed and printed!  The art, story and tactile qualities of a book can leave readers with a magical experience that lasts a lifetime and is handed down to generations. In addition I want to give back and help promote literacy by creating NFT programs in which C&W and YOU can donate our books to meaningful charities!

Join me on this journey as I strive to curate beautiful NFT/book collections, promote literacy and help fellow creators, authors & illustrators monetize and publish their work! The future is ours! Ralph Cosentino, born in Argentina, raised in New York, is the son of flamenco dancers. As a young boy, he often coerced his younger sister out of her piggy-bank money so he could buy superhero comics. At age 12 with a pile of comic book drawings under his arm, he walked 20 some blocks from Grand Central Terminal to Marvel Comics HQ looking for a job. At 15 he worked for the Dolly Madison Bakery Co. and wore a vile-smelling “Snoopy” costume outside stores to attract customers. He was often flipped off and cursed at, but held his composure and was determined to make Charles Schultz proud (ralph is a consummate professional). He now cringes at the site of “Zingers” but loves telling stories and creating innovative characters.

After studying at the Cleveland Institute of Art, Ralph worked for various advertising agencies in Cleveland as a designer and illustrator and held senior posts at American Greetings and Hallmark Cards. His clients included Target, Viking Books, Cartoon Network, Warner Bros., DC Comics, and more.

His characters including Honk-Honk-Ashoo have been licensed as toy lines in Target. His self-produced Kaiju Kidz toys sold out at retailers such as Kid Robot and Tower Records and the IP was also developed as an animated TV series with Cartoon Network. Ralph is the author and illustrator of various children’s books including “The Story of Honk-Honk-Ashoo and Swella-Bow-Wow,” “The Marvelous Misadventures of Fun-Boy”, and the best selling, super-hero origin series for Viking Children's Books; “Batman The Story of The Dark Knight,” "Superman The Story of the Man of Steel," and "Wonder Woman the story of the Amazon Princess." All of which have been translated into numerous languages and sold throughout various countries.

Kitty Cones and Peanut Bear are his latest series of books published by Insight Editions & Scholastic and are also currently licensed for a variety of products throughout the U.S. His Kitty Cones Genesis NFT releases sold out and he is currently working on a generative NFT Kitty Cones launch.

His passion is telling stories with his characters that help teach children about empathy, kindness, diversity, to believe in themselves and understand it's ok to be YOU.

Ralph lives in Connecticut with his wife, two dogs, and three cats.

C&W is Passionate About NFTs & Books

We love the possibilities that NFTs can bring to creators AND fans! From their collectibility to the perks of being holders to access merchandise, behind the scenes videos, events and more!   When it comes to books, we're skilled and experienced in the art of  book design and printing and one of our biggest sources of inspiration is our passion for vintage children books. From the textural qualities of covers and how they are bound, to typography, illustration styles and beautifully designed endpapers. A book is more than an object, it's an experience. 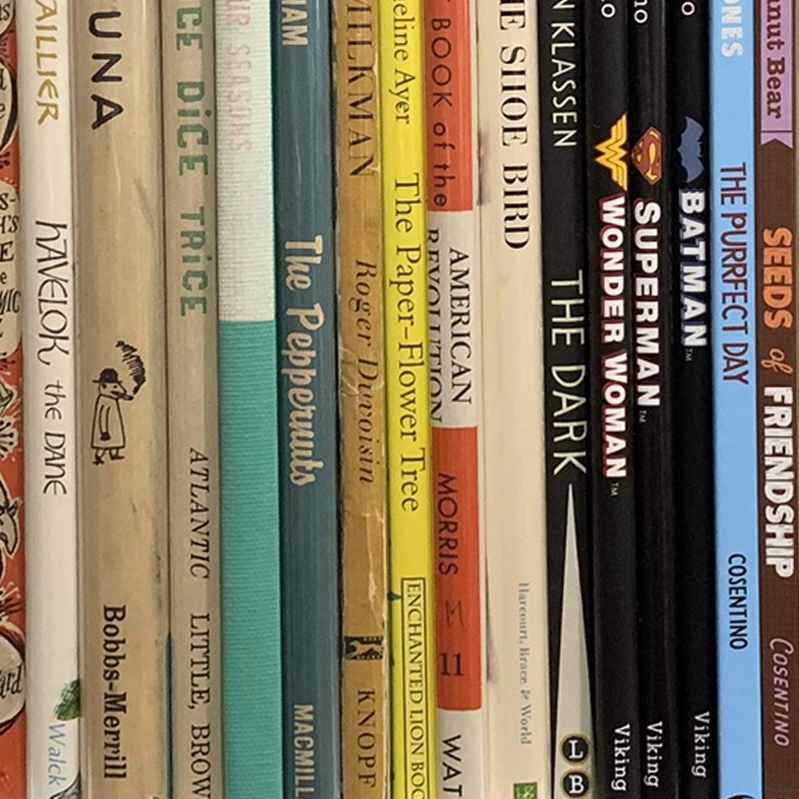 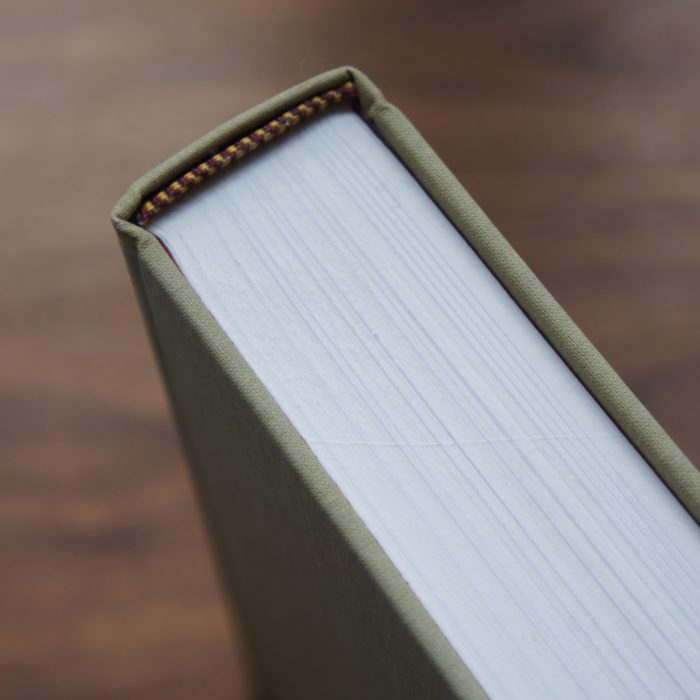 As passionate as we are about books and reading we are also dedicated to literacy. We want every child to have the opportunity to read and these wonderful charity partners make sure that kids can experience the wonder of books!

Project Night Night donates over tens of thousands of Night Night Packages each year to homeless children 12 and under who need our childhood essentials to have a concrete and predictable source of security and an increased exposure to high-quality literacy materials during their time of upheaval. Reader to Reader, Inc. is a 501(c)(3) public charity dedicated to bringing books, free of charge, to under-resourced school libraries and public libraries across the United States.

Reader to Reader serves the nation’s poorest communities, including inner-city schools, Native American Reservations, and poor rural towns, where the need for books is acute.

For more info visit their website: Reader to Reader.org

I Am the Frankenstein Monster!

As a young child I read monster comics, magazines and watched classic monster movies late nights with my father. As I became older I read the original literature and folklore. Once I had kids of my own and followed the tradition I had of watching the same movies with my father, I realized there weren’t many picture books telling these monster origins in a fun, not too scary of a way for kids. After all these original stories involved grave robbing, biting humans and blood-sucking! I decided to create my own series of books retelling the origins of the monsters we all love! 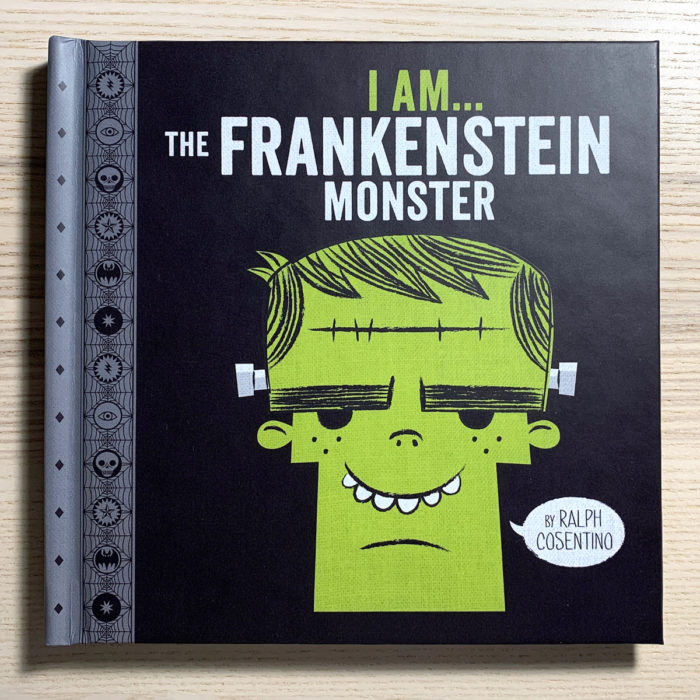 This introductory story depicting a day in the life of the Frankenstein Monster can be read at bedtime, during Halloween or anytime of year. I Am the Frankenstein's Monster retells Mary Shelly's original novel in a fun, simple way for kids and parents to enjoy! The monster's creator leaves them alone in the castle where they make friends with all the castle's critters! They soon discover Victor Frankenstein's library and begin to learn about and explore the world around them! The story includes an auditory aspect so kids and/or parents can role play as the monster while reading along: “RAAH! RAAH! STOMP! STOMP!”

Lavishly illustrated in an old school style with 2 spot colors!
I hope you enjoy C&W's first book as much as I did creating it! 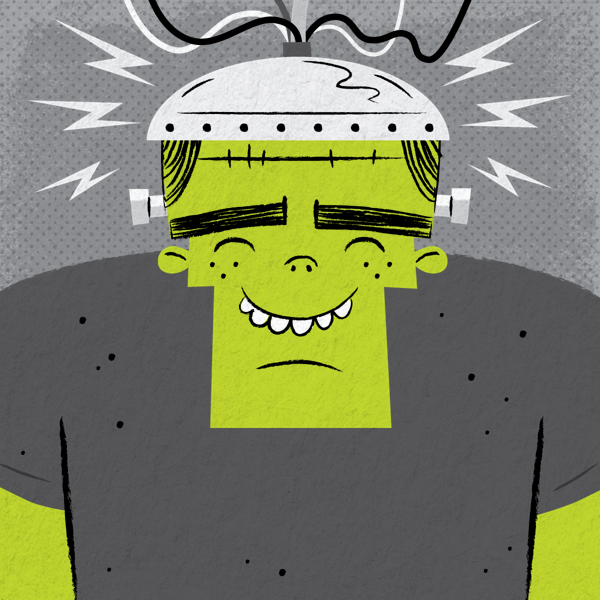 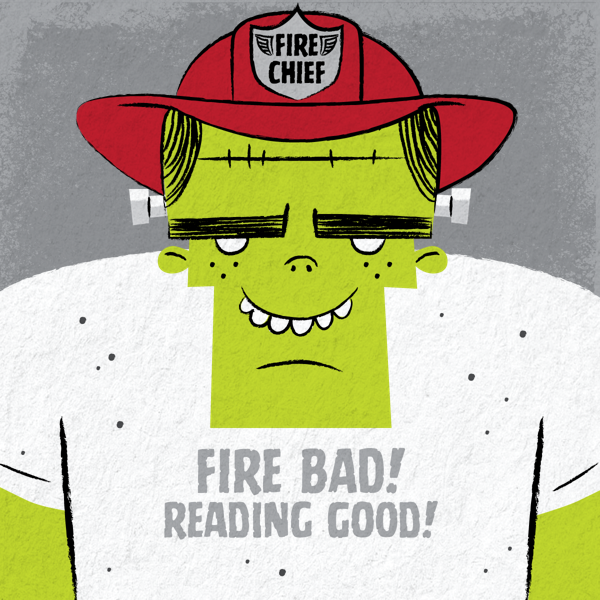 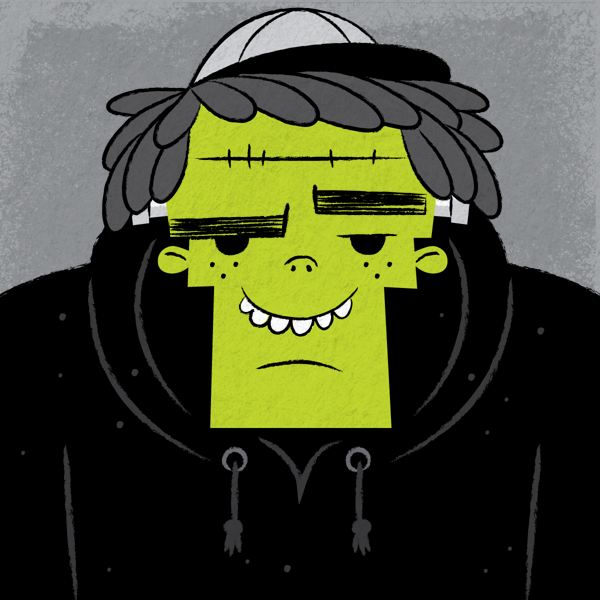 The I Am the Frankenstein Monster NFT collection introduces the monster in 10k unique, fun, PFP portraits sure to make everyone scream!  AND if we reach our 10K sold-out goal, every holder receives 1 FREE limited edition book (shipping not included) per NFT held and/or can choose to donate it to one of our Literacy charities! View the collection on OpenSea!

I Am the Frankenstein Monster Minting Now!

View the collection on OpenSea!

Meeting our goal of selling out the "I am the Frankenstein Monster" 10K NFT collection helps fund production of our next NFT & book releases AND getting more books to our charities! 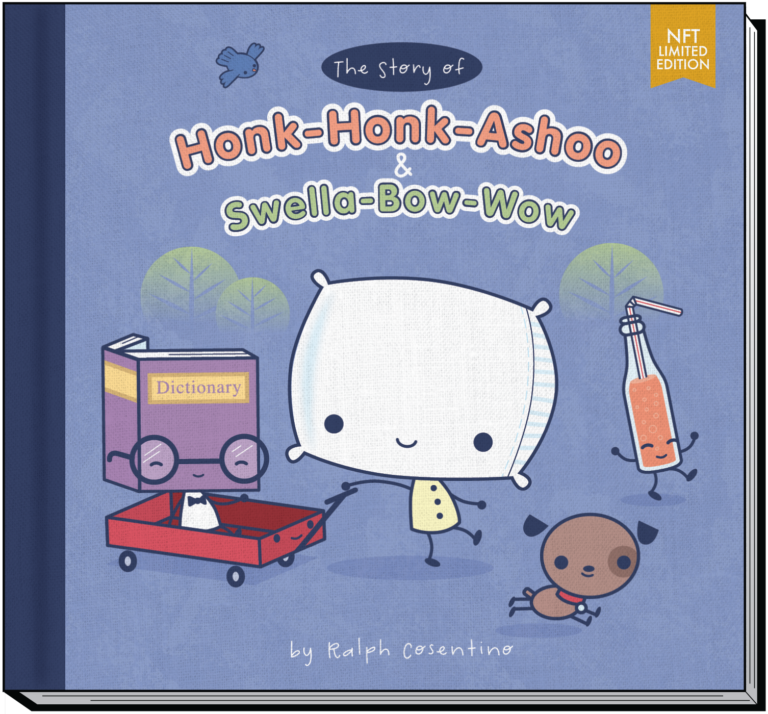 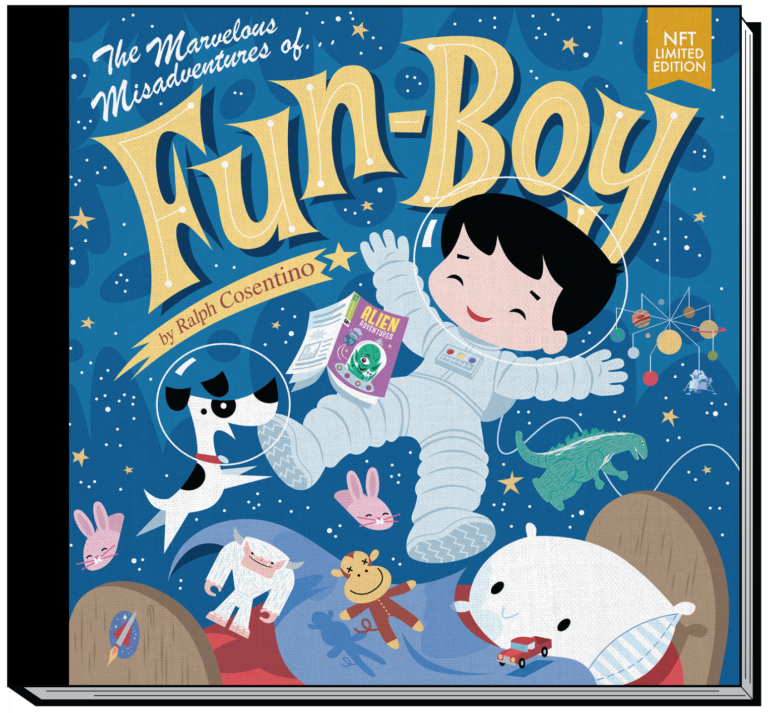 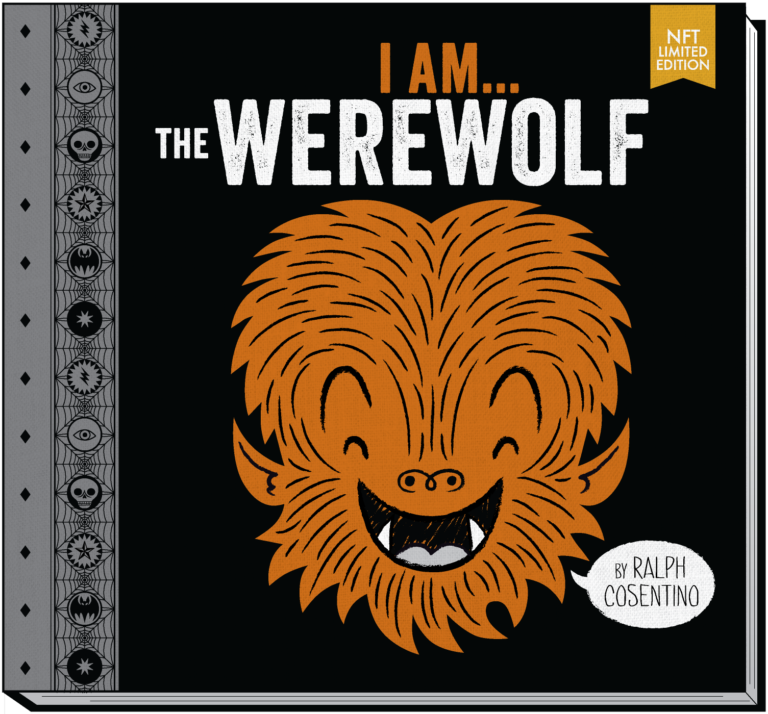 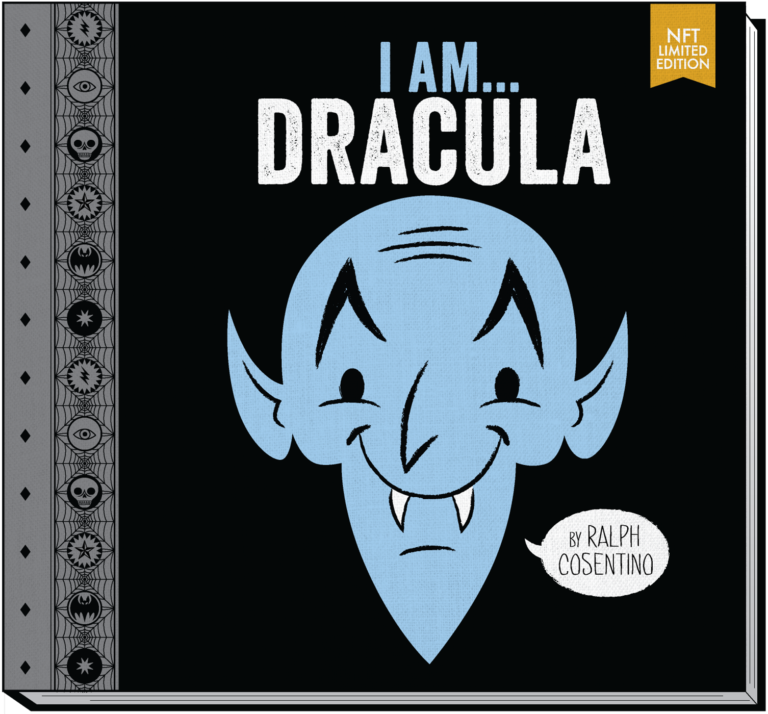 The Value of your NFT as a Holder

WHAT IS AN NFT?

A non-fungible token (NFT) is a unique digital identifier that cannot be copied, substituted, or subdivided, that is recorded in a blockchain, and that is used to certify authenticity and ownership.[1] The ownership of an NFT is recorded in the blockchain and can be transferred by the owner, allowing NFTs to be sold and traded. NFTs can be created by anybody, and require few or no coding skills to create.[2] NFTs typically contain references to digital files such as photos, videos, and audio. Because NFTs are uniquely identifiable assets, they differ from cryptocurrencies, which are fungible.

NFTs can be collectible, sort of like trading cards to sell and or swap with other collectors.  They are also viewed by many as art in a static or animated form.  NFTs can also be a pass or membership to other benefits like products and or events.

The story behind C&W

Cruikshank & Wallace is dedicated to the life of John Wallace Skinner, a World War II veteran, who, at the age of 17, helped liberate the Buchenwald Nazi concentration camp in Germany. After the war, John returned home to Ohio, where he became the Director of the Salvador Dali Museum in Beachwood, the Director of the Cleveland Aquarium and proud owner of an independent book and print shop in downtown Cleveland. It was at this shop where C&W founder Ralph Cosentino met John Wallace Skinner. After attending The Cleveland Institute of Art, Ralph landed a design job at the studio above John’s book shop. After one visit, the two became lifelong friends. – John Wallace Skinner remained a great influence on Ralph’s life, artistic style, and his view of the world. John introduced Ralph to 18th-century British cartoonist and book illustrator, George Cruikshank, who also would become a source of inspiration in Ralph's career. – The logo for Cruikshank & Wallace of a bird fleeing its cage captures the feeling most people experience when they reach for a book off a shelf: the ability to escape from reality—if even for a brief moment—and let their imagination bring them somewhere new and unfound. We're happy to review your project & potentially collaborate!
Just fill out the form and we'll get back to you asap.